What is Celestite? Learn More About This Angelic Crystal, its Properties, Meaning, and Uses 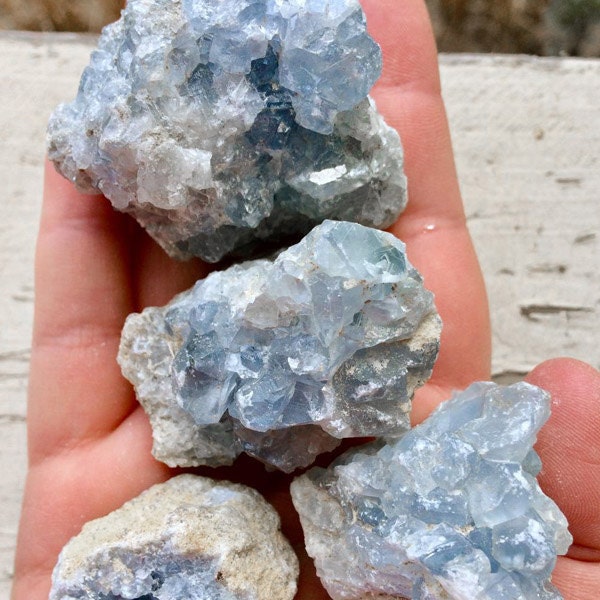 Celestite~ The Stone of Angels

The word Celestite is derived from the Latin caelesti which means heavenly. The lore behind this stone is that it aids in connecting you to your guardian angel and in the transition to a state of peaceful awareness.

This special stone is found on nearly every continent and comes in a range of colours, a pale blue being the most common. The pale blue colour is so distinctive that ancient cultures thought it was a piece of sky fallen from the Heavens. It is often found in geodes alongside Amethyst or clear quartz, two stones which also support the positive vibrations of Celestite.

Other colours include: white, gold, red, and yellow , with white being the least common.

Celestite is a high vibrating stone with a gentle energy. Vibrating crystals have a more finely attuned frequency which boosts their healing abilities. Celestite is known for its calming energy and its ability to bring strong mental and spiritual clarity. Keeping a piece on your night table can help to remove negative thoughts and feelings, giving you a peaceful night’s sleep. Its calming energies can also help to keep nightmares at bay.

Celestite supports three of the main Chakras - throat, crown, and third eye Chakra. It is sacred to the third eye Chakra and essential in enhancing or developing psychic vision. In order to boost this ability, it is best to wear it near the seat of third eye Chakra’s power, or center of the forehead. Some people will wear a small circlet with a jeweled piece, others choose to wear a hair clip or earrings, as wearing a circlet is not always possible nor to everyone’s personal taste. Celestite is a fragile crystal, so you need something that will not be exposed to harsh conditions.

Pairing Celestite with other crystals:

-Bloodstone and Red Jasper can complement the power of Celestite by helping you deal with negative emotions or energy and help you take action to deal with your spiritual experiences.

-Labradorite and Danburite are often used with Celestite in psychic readings.

Celestite is a water stone and people often pair it with other water stones, such as Aquamarine, Moonstone, and Selenite.

Cleansing and recharging your Celestite:

-Bury them in a glass bowl filled with flower petals. Rose petals renew love, lavender is for healing and peace of mind, sunflowers are for vitality, but you can use any flower from your garden.

-Bury them in a glass bowl of brown rice for up to twenty-four hours. Make sure you throw out the used rice when done.

-Bury them in the earth. You can use a glass pot filled with clean soil, and then rinse them thoroughly under running water, making sure to clean the soil from any small indentations.

I prefer to charge my Celestite in moonlight. Sunlight can be too harsh for these fragile crystals and I feel more connected to the Heavens in the night. The best time is to lay them out the night before, the night of, and the night after the full moon, to fully charge your crystals.

An interesting bit of trivia, Celestite is also used in fireworks. The strontium in Celestite helps to stabilize the fireworks effects.

Sara Allen Stewart developed a love for crystals, stones, fossils, and gemstones the first time her Aunt Alice took her to a rock and mineral show. Since then, her collection has grown, as well as her education about the history and folklore behind them. She is a published fiction author often who uses this knowledge in her writing.